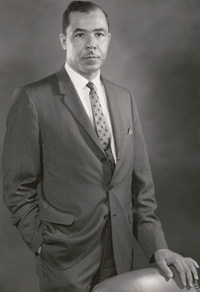 Asa Greenwood Yancey was born on August 19, 1916, in Atlanta, Georgia, to Arthur H. Yancey and Daisy Lois Sherard Yancey. Destined for a long and distinguished career as a nationally recognized surgeon and educator, Dr. Yancey's impact on medical education in his hometown and the surrounding state can still be felt today.

Raised on Beckwith Street in Atlanta, he showed glimpses of intellectual brilliance at a young age. Graduating valedictorian from Booker T. Washington High School in 1933, he went on to attend Morehouse College, where he graduated with highest honors in 1937.

He enrolled in medical school at the University of Michigan and was one of only four African American medical students in the class of 1941. After completing his internship, Dr. Yancey trained under Charles R. Drew, MD, at Freedman Hospital in Washington, D.C., in the Department of Surgery at Howard University School of Medicine.

In his first leadership position, Dr. Yancey served as Chief of Surgery at the VA Hospital in Tuskegee, Alabama, from 1948-1958. Then he traveled back to Atlanta to become the first African American physician on staff at Grady Memorial Hospital, serving as Chief of Surgery at Grady's Hughes Spalding Pavilion until 1972.

Shortly after assuming this leadership role, Dr. Yancey established the first surgical residency program for African Americans in the state of Georgia. In 1964, he became the first African American faculty member at Emory University School of Medicine when he joined the Department of Surgery. Shortly thereafter, he helped establish the Cardiology Center at Emory. Despite having a very rigorous medical schedule, he also sat on the Atlanta Board of Education from 1966-1976.